For several days I tried mobile chess for you, and during this time they were often asked to tell you how to do it so that you can play it yourself too. I tell.

First you need to register yourself an account. To do this, go to the official website of the game and in the upper right corner click on the registration button. 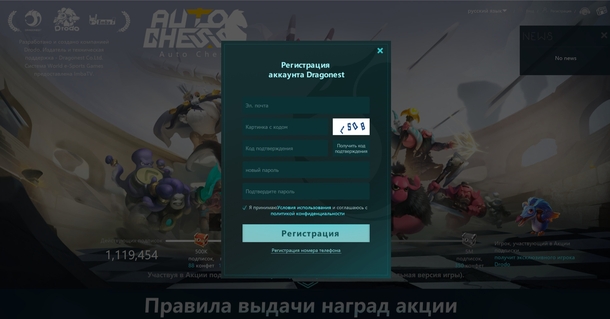 Everything is quite simple here. Perhaps the only thing worth mentioning is an incomprehensible bug in the game itself that will not allow you to log in if your mail is longer than 18 characters, so check this in advance so that it will not hurt for purposelessly spent minutes. Yes, and do not register through the phone, if you suddenly had a Chinese number by chance.

Further, if this does not happen automatically, you enter the account on the site (the button is also in the upper right corner), then click on the “official booking server”, thereby connecting to the beta test, and then “Test Android download server” – this is directly downloading the apk file of the game.

Just today a small update of the mobile version came out, which says that now the owners of IOS can get access to the game. Apparently, the game appeared in the App Store. Unfortunately, I don’t have the opportunity to check this, but you can try to look for it there.

By the way, having scrolled the page a little lower, you can find the link button for your Steam account. If you plan to play the mobile version of the game, then I strongly recommend that you tie it up, because when the game is released, candies will be issued depending on the activated codes and games played in the Dota version.

At the moment there are 2 different ways to play Auto Chess Mobile.

The first is to transfer the apk file that you downloaded from the site to your phone and open it. Then the game will start, update and you can enter using the data with which you registered on the site. Please note that this trick works only for Android devices. IOS owners should find the app in the App Store (the developers said that it is there, but I’m not completely sure about this).

The second is to install the Android emulator and use it on the computer. I advise Bluestacks 4 , it had the least problems with the game. It is enough to move the apk file to the emulator window and the game will start to install.

IMPORTANT! It is possible that in order for the emulator to work at full strength you may need to activate the virtualization technology in the BIOS.This will allow Windows to create other operating systems inside itself (Android, for example) and the emulator will run faster. How to do this, you can google it yourself, because for different manufacturers of motherboards there are different ways to enable this feature.

In the game itself, for a comfortable life, you will need to do one more thing – switch the game language from Chinese to English. Russian in the game is planned, but so far it is not.

In addition, Bluestacks 4 has another quite useful feature – the ability to assign keyboard keys to certain actions on the emulator screen. For example, it will be much easier if, like in the Dota version, you can open the character purchase window with a space, roll the “D” button and buy the experience with the “F” button. You can configure almost everything – switching between the fields of opponents, displaying information about other players, etc., but I limited myself to the most basic, just to try.

To do this, on the bottom panel of the emulator, you need to click on the keyboard icon and use the “tapa area” tool, simply dragging it to the place where you want the keyboard button to work instead of the mouse. There is not difficult, I think you will understand. But a couple more pictures just in case.

That’s probably all the information you need in order to start your journey in mobile chess. If you still have any questions, leave them in the comments.